Few walking routes in the world can compare with the iconic Camino de Santiago. What was once a solely religious pilgrimage route to the Cathedral of Santiago de Compostela, has become so much more and each year on average over 300,000 people make their way along the path of St James. Some do it for health or spiritual reasons, others find it the perfect way to disconnect or to find peace, while some simply enjoy the wonderful adventure that comes with traipsing slowly towards the horizon each day with little else to worry the mind.

Quite simply, there is something about walking the Camino that isn’t found on any other walking route. Maybe it’s the history or the wonderful camaraderie between pilgrims. Perhaps it’s the sumptuous landscapes or the hearty Spanish cuisine served in bountiful supply along the way.

This is one walk you’ll never forget.

At U Walk, we take care of the small hassles, so you don’t have to. Whether you’re looking to do the northern sections of the Camino Portugues, or the famed Camino Frances which snakes from the French town of St Jean de Pied Port to the gates of the Santiago 769 kilometres away, we’ll provide everything you need to experience the Camino de Santiago in its full glory. 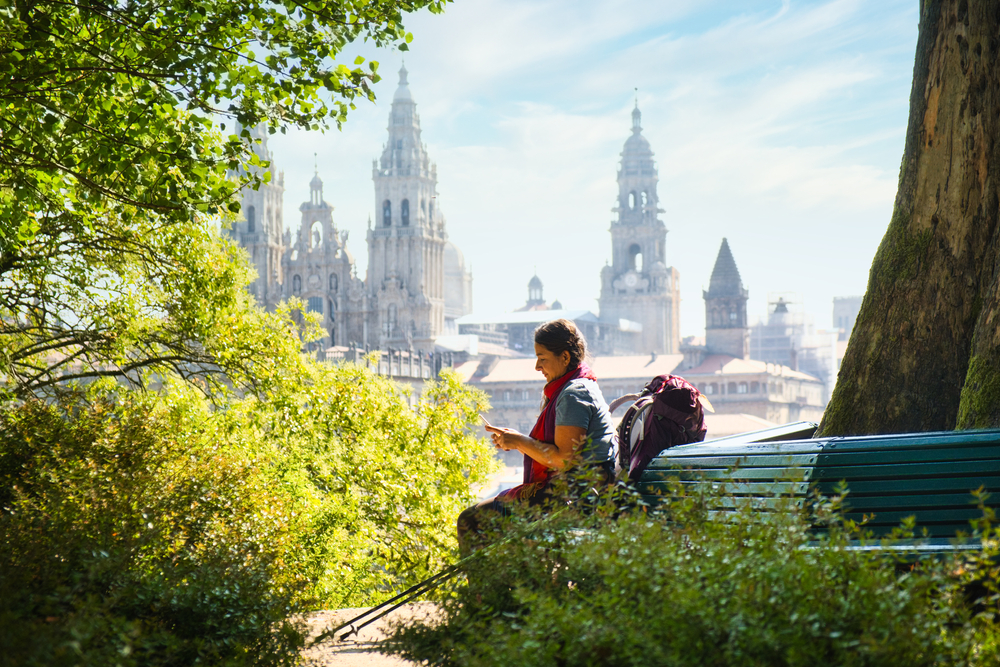 Part of the alluring charm of the Camino de Santiago is that pilgrims, like yourself, have been walking along these routes for over a thousand years. According to the legend, St James, one of Jesus’ disciples, spent time preaching the gospel on the Iberian shores, only to return to Judaea after witnessing a vision of the Virgin Mary.

Sadly that’s where the story ended for St James as he was beheaded by the Romans in Jerusalem in 44 AD. Exactly what happened next is very much open to interpretation, either his followers brought his body back to Iberia, or it was carried along on a boat piloted by an angel, and his final resting place is where the Cathedral in Santiago now stands.

The earliest records of what we would call a pilgrimage date from the 9th Century and gradually grew to become the most important Christian pilgrimages during the later Middle Ages. Political unrest, the black plague and the Protestant Reformation saw numbers drop dramatically from the 16th Century and by the 1980s, only a few hundred pilgrims were walking the Camino.

But of course, it has come roaring back which has seen considerable infrastructure put into place to support it. Today, all the routes are roughly divided into sections, with albergues, hotels, restaurants and plenty of bars along the route.

What does El Camino mean?

El Camino simply translates as ‘the way’ in Spanish and can be used to describe a path or trail, but is more commonly used to refer to the routes of the Camino de Santiago.

How long is the Camino de Santiago?

Firstly, there are technically nine routes or sub-routes that constitute the Camino de Santiago, and UWalk provides self-guided and guided walks along all of them. The Camino Frances is the most popular and links St Jean de Pied Port with Santiago, a distance of 769 kilometres. The Camino Portugues begins 610 kilometres away in Lisbon and also includes a small off-shoot known as the Portuguese Coastal, which leaves the original Portuguese Camino at Porto but also finishes in Santiago. With UWalk, you can experience the final stretch of the Portuguese Way that links Porto and Santiago over two separate stages.

How do I choose which stage to do?

It can be difficult to choose a stage, which is why we’ve added plenty of descriptions on each stage page. Doing the final stage means that you experience walking in Santiago de Compostela, which gives you that extraordinary feeling of being at the end of an epic journey.

Even though you stay in Spain or Portugal for almost the entire route, each stage is very different and you’ll notice plenty of change in the terrain as you head west. Broadly speaking, things get greener and wetter the closer to Santiago you get.

Do I need to walk it all in one go?

No, you don’t need to walk it all in one, in fact, most people do smaller sections over different periods, finishing and starting in the same place, so still completing the entire journey. With U Walk, stages can be adapted to suit and are generally a week in length.

How difficult is the walk?

Generally speaking, very few parts of the Camino would be considered difficult hiking terrain. This is a walking route that is accessible to almost everybody with the odd section where things get more difficult. One of the most difficult days of Camino Frances is the first day as you climb up and over the Pyrenees, while Day 6 of Stage 5 also includes a steep ascent as you climb to the highest point of the French Way, O Cebreiro.

The two sections of the Camino Portuguese are both relatively flat, with the first a little more difficult than the second.

Can I do the Camino alone?

Absolutely. The route along the Camino is very safe and you are guaranteed to make friends along the way. Some would even argue that doing the Camino alone adds an entirely different dimension to the walk than if you were with a group of friends.

Most of the accommodation that we use along the Camino are 2* or 3* hotels or pensions, with the occasional 4*, all of which are either directly on the Camino or close by and each room comes with private facilities.

What do we do about luggage?

That’s the beauty of U Walk. Each morning we’ll take care of your luggage and make sure it’s waiting for you when you arrive at your next destination. It really couldn’t be easier. We do suggest using a small backpack during the day for water, snacks, waterproofs, a first-aid kit, sun cream, a change of socks and whatever else you might want to carry along.

How can I avoid getting blisters?

Unfortunately, blisters are a common occurrence on the Camino or any other long-distance hiking route for that matter. We recommend bringing some plasters and a few Compeed Blister Pads which can be applied directly over a blister when it’s emerging. The best way to avoid a blister is to make sure you’re using good quality footwear that is both properly fitting and broken in.

Are transfers included in the price?

Transfers are not normally included in the price because costs typically vary depending on the number travelling but we do however have special rates in most areas along the Camino. Public transportation is widely available and train or bus tickets can be purchased through the links below

How should I prepare for the Camino?

In terms of physical preparation, we recommend some training beforehand. While none of the stages would be classified as extreme, seven days of walking is still a lot on the body, especially if you aren’t used to it. Start gradually if you can and work up to longer distances from there.

What is the Pilgrims Passport?

The Pilgrims Passport is a small booklet carried by each pilgrim that needs to be stamped at each location you spend the night (though many other places offer stamps in between also). This acts as proof of how long you have travelled, but also a great memento to take home with you.

What is the Compostela certification?

The Compostela certification is a personalised certificate given to any walker arriving in Santiago who has travelled at least 100 km. The final stages offered by UWalk, on both the Camino Frances and Camino Portuguese, are sufficient to claim your certification in Santiago.

The weather can be notoriously unpredictable in both Northern Spain and Northern Portugal so it’s important to come prepared for both sunshine and rain. A decent waterproof coat is a must as is a warm layer for when the nights become chilly. Most pilgrims walk the Camino with just two sets of clothes (though because we transfer your bags between locations you have much more flexibility) and laundry facilities can be found frequently along the way.

Perhaps the most important aspect to think about is what goes on your feet. The majority of the Camino can be done with a decent pair of trainers, though most choose walking boots with some ankle support. Walking poles have become part and parcel of the Camino landscape these days and many say they help with balance, though they aren’t strictly necessary for any stages of the Camino.

That’s the basics covered, whatever else you need, think small, travel size. The routes pass through villages, towns and major cities, so it’s always possible to pick up something along the way if and when it’s needed.

By far the most popular time to do the Camino is during the summer months when the route of the Camino Frances, in particular, can become surprisingly busy. This period comes with benefits and drawbacks. On the plus side, the weather is usually at its sunny best, but a long day walking under the baking Spanish sun will test anybody’s mettle. Some people enjoy the hustle and bustle of the summer, while others find that crowds can be a little too much.

If the summer isn’t for you, May or September are both popular months to walk the Camino that usually both come with great weather, without the oppressive heat of the summer.