Stage one is well known as one of the most rewarding walks on the French Way, here pilgrims will be spoilt with stunning views of the countryside. The first day’s walk departs from St Jean du Port, a picturesque village located at the foothills of the Pyrenees. Pilgrims then reach Napoleon’s pass begins with 18km of continuous ascent across the French – Spanish border and continues during the week to the walled city of Pamplona and beyond to finish in beautiful city of Estella.

St Jean Pied de Port is a beautiful bustling French market town in the foothills of the Pyrenees, which creates a natural border between France and Spain. It is the traditional starting point for Camino Frances, the most popular of all the Camino routes. Situated 8km from the Spanish border on the banks of the River Nive, the Camino Frances commences with its first steps by a small stone bridge, alongside the Nive. Both routes are incredibly beautiful walks, taking in the wonderful Pyrenees vista and Basque countryside.

Leaving Roncesvalles is a welcome change as the route is mostly downhill after yesterday’s excursions. 300 meters after Roncesvalles you will come to the Cruz de Peregrinos a 14th century Gothic pilgrims cross, which was moved here in 1880 from further up the mountains. The cross depicts King Sancho el Fuerte and his wife Clemencia.

The trail then follows the side of the N135 for most of the day – a quiet country road that weaves down the foothills towards Zubiri; initially is tree lined and most of the day is easy underfoot, with views varying from the ever-present panoramic of the Pyrenees to quaint little farmhouses dotted through the landscape.

On this stage, the Camino runs along the river Arga, at the foot of a group of hills covered in beech, oak and Scots pine forests. The path out of Zubiri is mostly dirt and gravel except for stretches that had recently been covered with stones. As we approach Pamplona, the landscape shows the obvious influence of civilisation; with its conifers, re-forestation and farmlands.

The route from Pamplona is a mixture of countryside and busy roads, and one of the best views that you are ever likely to have of Pamplona. Leaving Pamplona the route is well marked out and takes you across some local parks before heading into a small valley.

The early part of the day includes some climbs around Cizur Menor but the views are worth the effort and you can enjoy the descents as you get nearer Puenta La Reina.

Today is much quieter day now that we are away from Pamplona; most of today’s trail is along tracks through farmland and sometimes on the special pilgrims’ footpaths that are constructed from compacted earth.

After leaving Puente La Reina by crossing its magnificent bridge, the Camino Frances continues through beautiful hilly vineyards and typical old villages with cobbled streets. This is a nice and easy stage of the Camino, perfect to enjoy the landscapes of the Navarra Region.

Price of €525 per person includes:

We have chosen popular family run hotels / pensions along the route. Accommodation is simple and follows the character of the area. 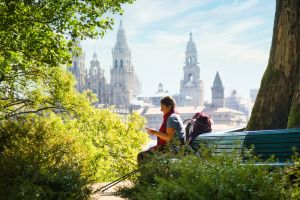