A typical day on the Camino

Previous Next
A typical day on the Camino

For those choosing to walk the Camino de Santiago, whether in its entirety or smaller sections, you will often find yourself following a rough pattern day after day. That’s not to say that every day is exactly the same, but the nature of walking the Camino means you tend to follow a determined routine and an approximate schedule.

It’s important to remember that everybody walks their own Camino. Some choose speed as a determining factor, while others actively seek out the slower way of doing things and choose to meander sedately while taking in their surroundings. There’s no right way or wrong way to walk the Camino de Santiago.

However, while each Camino is unique – and thankfully so – sometimes it can be helpful to get a sneak peek of what a normal day on the road might look like. The following is not necessarily set in stone but is meant as a rough blueprint of a typical day on the Camino de Santiago

Early starts are common along the entire Camino, so if you’re planning on enjoying a lie-in, you may be in the wrong place. Many of the Albuegues actively encourage you to set off early for the simple reason that they have to clean and prepare the rooms for the next group arriving later that day, but if you’re staying in accommodation organised by UWalk, you’ll likely have a little more time.

There are also a few practical reasons for starting your day early, namely not wanting to finish too late in the afternoon and avoiding the worst of the heat and beating the crowds to the next destination.

Breakfast habits differ for everybody and your options really depend on where you are. If you start walking early, you may have to get a few kilometres under your belt before you find somewhere to have a coffee and a bit of breakfast that usually consists of toast and jam or pastries. In Spain in general, cooked breakfasts aren’t common, with the first meal of the day normally a light one, with a small snack later in the morning. 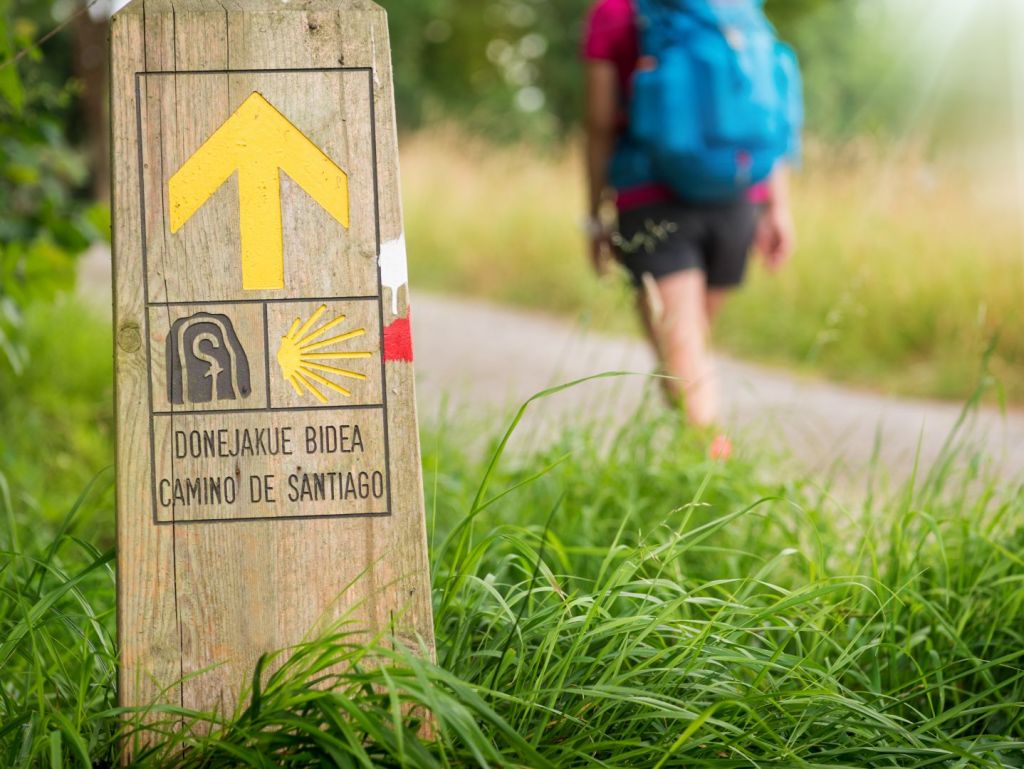 Once you’re out onto the Camino, preferably after a coffee to give you that little morning kick, you begin that time-honoured human tradition of placing one foot in front of another for several hours in order to reach a distant destination.

While some try to stick to a daily schedule, it’s often best to just go with the flow because you never really know what you’re going to find along the Way. Perhaps a shaded restaurant takes your fancy and you decide to stop for an ice-cold Coke or ice cream. Maybe the look of a nearby chapel just off the Camino catches your eye and you spend a happy half an hour exploring its cool interior.

Then again maybe you just want to plod along slowly while bonding with your newly acquired best friend who you’ve just met while taking in your glorious surroundings. 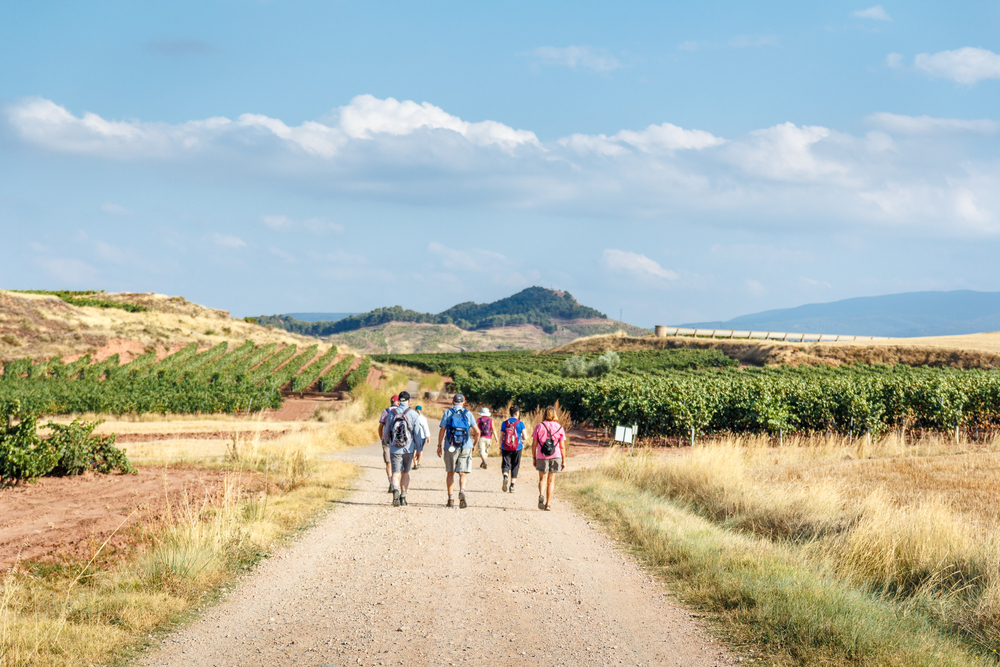 Depending on where you are, lunch on the Camino can vary hugely. If you happen to be passing through a town or city, you might stop at a restaurant for a proper sit-down meal to give you that much-needed calorie boost after the morning’s exploits. Just bear in mind that lunch in Spain usually isn’t until 1 or 2 pm, so turning up ravenous to a restaurant at midday might leave you disappointed.

However, for many on the Camino, lunch is often a good old fashioned bocadillo – an enormous Spanish sandwich – served from one of the many cheap and cheerful cafes along the way. Don’t expect anything too complicated, with cheese and chorizo the most popular choices, but for just a few euros, they are an excellent cost-effective choice.

Once you’ve wiped away the last of those crumbs, it’s time to saddle up and hit the road once again. 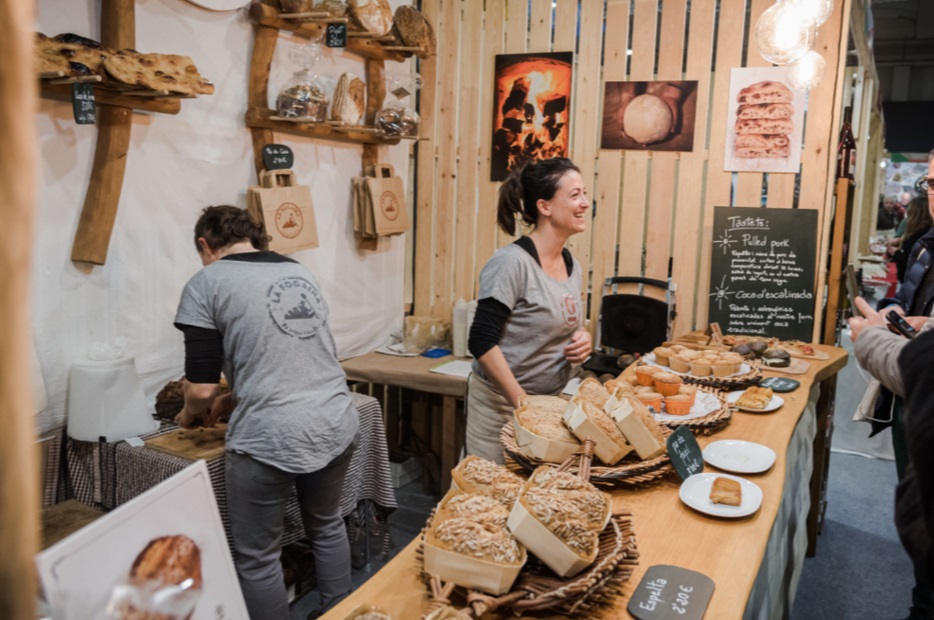 In many ways, an afternoon on the Camino is exactly the same as the morning, though often with higher temperatures, which makes planning ahead important.

Most stages on the Camino are between 20 km and 30 km with a clear, set destination in mind. How quickly you arrive there of course depends on how quickly you walk, but most people will walk 20 km in 4 to 6 hours.

When you arrive at your destination, you will typically check into your accommodation and it goes without saying that a nice hot shower after 6 hours of walking feels superb.

Once you’ve freshened up and washed the grime of the road away, it’s time to see the sights – and in some places, the term ‘sights’ can be used liberally. If you happen to be in a city or town, late afternoons and early evenings are wonderful periods to casually stroll through the old streets and to soak up the atmosphere of small places that you would never normally get to see if you weren’t walking slowly across Spain.

In small rural locations, where getting anywhere will require much more walking, people tend to either congregate at the Albergues or in small cafes or bars in the village for a few pre-dinner drinks. Some take this time to catch up with laundry, a diary or maybe a book, while more than a few will curl up in bed for a well-deserved nap. 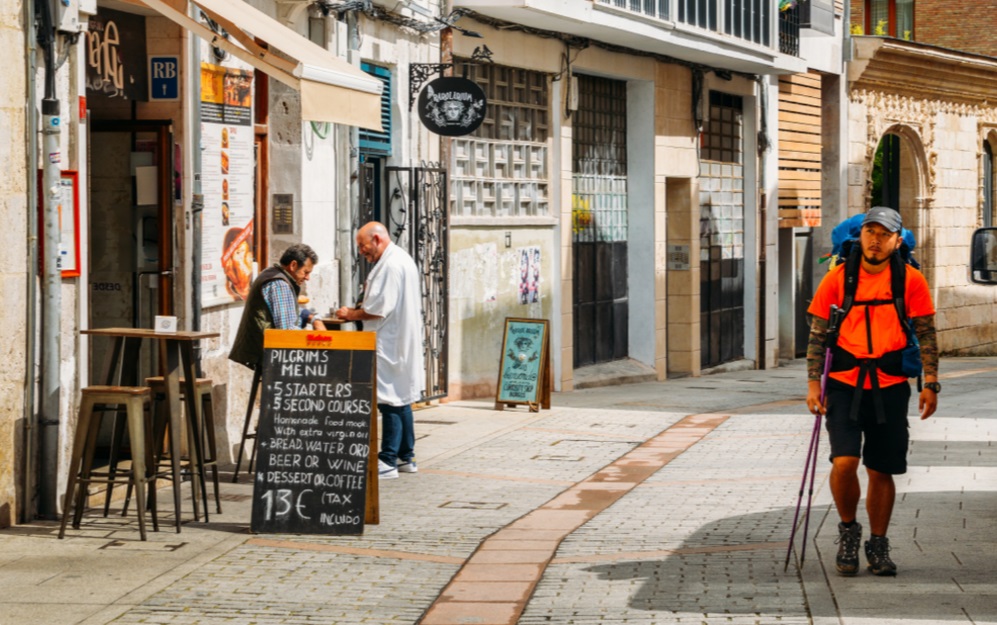 Evenings can be a wonderful time on the Camino de Santiago, as groups gather in small squares to tell their war stories involving blisters, broken backpacks and wrong directions. Apart from the actual walking itself, it’s here that you get the wonderful sense of camaraderie between walkers and the social aspect shouldn’t be overlooked.

Mountainous evening meals accompanied by equally liberal sized glasses of wine are a great way to end the day. There’s something liberating about being able to eat whatever you like because you know the very next day you will once again be rising around sunrise to do it all again.

Your choice of evening activity will often depend on where you are and of course how tired you are at the end of the day. The cities are vibrant places that offer plenty of evening activities, but most walkers tend to not overdo it, with most in bed by 10 pm. After all, it’s another big day tomorrow.

Click here to view our walking holiday packages for the Camino Frances, Camino Portugues and the Celtic Camino.