Walking through the olive groves and rugged hills of Andalucia

Outside the golden cultural triangle of Seville, Cordoba and Granada, the rural landscape of Andalucia is breathtaking, and what better way to appreciate its diversity than on foot. The walks take us through rugged hills, picturesque fields of sunflowers, olive groves, the limestone peaks of Sierra de Grazalema Natural Park and the stunning El Chorro Gorge & Caminito del Rey. In this corner of Europe the excesses of modern life do not seem to have taken root and our home for the week is the perfect example: a rustic, homely cortijo in the heart of the agricultural countryside. During the week, a whole day is reserved for exploring the magnificent city of Seville. For those looking for more of a challenge, our departures graded level 4 feature longer walks on steeper terrain.

Our trip starts at Cortijo Rosario, located in the heart of the authentic Andalucian countryside, approximately 100km from Malaga. Our converted farmhouse is just a short walk from Algamitas, a peaceful traditional village far from the hustle and bustle of the big towns or cities. This location is ideal as it gives the chance to experience the real Spain, whilst still offering very easy access to the best walking areas and Andalucian towns such as Olvera, Setenil and Seville which we’ll visit during the week.

Today we take a guided walk on the trails and paths around the Cortijo and on to the neighbouring village of Villanueva. The countryside surrounding Algamitas is picture-perfect, covered with olive trees, beautiful farmland and rolling hills. During the walk, our leader will give us a good overview of the rural lifestyle and traditions of this part of the world, which are largely based around the production of olive oil. An optional tapas lunch in the village gives us a chance to soak up the authentic Andalucian atmosphere. Once back at the Cortijo, we have some free time to relax by the pool or enjoy a drink on the lovely outdoor terrace. We then have dinner and stay overnight at the Cortijo.

Our private bus will drive us high into the Grazalema Mountains over the Pass of the Doves. Designated a UNESCO Biosphere reserve in 1977, the Sierra de Grazalema was declared the first natural park in Andalucia in 1984 and is one of Spain’s most ecologically outstanding areas. The park is famous for its spectacularly rugged limestone landscape of cliffs, gullies, caves and gorges. We walk up past this fantastic scenery and down into the white Village of Benaocaz.

Walk to the abandoned Caños Santos Monastery and enjoy stunning views; walk to Setenil, a unique ‘Pueblo Blanco’ with homes built into the side of a gorge – Leisurely/Moderate departure (level 2)

Today we set out from the Cortijo Rosario, walking through Algamitas farmland to the abandoned monastery of Canos Santos, where we will have lunch. In the afternoon we follow the Ruta de los Molinos along the river that runs through the famous white village of Setenil de las Bodegas. Built under the overhanging ledge of a gorge, Setenil is not only famous for its peculiar architecture but also for its bars, restaurants and food shops which are ranked as the best in the region. We have free time to discover Setenil and later return to the Cortijo by private minibus.

Introduction to the magnificent city of Seville with free time to explore; return to the Cortijo after dinner- Leisurely/Moderate (level 2)

In the morning we transfer by private minibus to the magnificent city of Seville. The day is free to sightsee at our own pace. Now the capital of Andalucia, Seville was one of the first conquests of the Moors. After the fall of the Cordoba Caliphate in the 11th Century, under whose direction it previously lay, it became the most powerful city in ‘Al Andalus’. Near the city centre is the evocative ‘Giralda’, an architectural masterpiece dating back to the 12th Century. Close by is the magnificent ‘Alcazar’, a complex of palaces dating back from Roman times and later used by both Moorish and Christian rulers. It has fine examples of Moorish and ‘Mudejar’ architecture, rivalling Granada’s ‘Alhambra’, and stunning sculpted gardens. After the Christian re-conquest Seville became famed as the gateway to the ‘New World’; Christopher Columbus negotiated here with Queen Isabella to fund his epic voyage to the Americas, bringing her back untold riches and making Seville one of the wealthiest cities in Europe. After immersing ourselves in Seville’s history and culture during the day, we enjoy the vibrant atmosphere of the city in the evening. We return to the Cortijo after dinner.

A short drive takes us to the El Chorro Gorge where we are dropped off at the Guadalhorce Dam and reservoir where we begin our walk. The walk will take us to the start of the amazing Caminito del Rey, which offers some of the most spectacular scenery in Spain. The Caminito del Rey is a narrow cliffside path hanging 100m above the waters of the river Guadalhorce. Originally built around 1905 and improved around 1921 it fell into disrepair and over the past decades, the path became known as ‘the most dangerous path in the world’ or even the ‘walk of death’. The new Caminito del Rey was re-constructed and reopened to the public on 28 March 2015, with the route and design of the path keeping as closely as possible to the old one but now respecting high safety standards. Due to overwhlemingly positive feedback, as of 2017, this walk is an included activity and your leader will be walking this path with the group.

After we finish the walk along the Caminito del Rey, there will be the chance to relax and have a little rest by the reservoir.

Today we walk a circuit around the impressive Penon Crag that looms over the Cortijo Rosario. El Penon is the highest point in the province of Seville – 1130m above sea level, offering dramatic views of the landscape around Algamitas and neighbouring villages, hills and farmland. On the way back from the Cortijo we stop for some drinks in a lovely panoramic terrace.

Our price of €1335 per person departing May 30th includes:

Our main base for the week is Cortijo Rosario, a beautifully converted farmhouse reserved exclusively for Exodus groups. Situated in the heart of the romantic Andalusian countryside, the Cortijo overlooks the small village of Algamitas and is within reach of Seville and the charming town of Ronda.

Together with its neighbouring sister village Villanueva, Algamitas is known as the ‘forgotten village’: modern development has more or less passed them by and life goes on as it has for generations. Little English is spoken in the villages, as the tourism boom on the coast has not affected the lives of these people, who are welcoming and keen to meet newcomers. The main income of the community is agriculture, with olives the main crop along with cereals, wheat and sunflowers. This rural location really offers a fascinating insight into the ‘real’ Andalucia.

All rooms have en suite facilities and there is a bar, lounge, outdoor dining area as well as a lovely pool. There are also two friendly dogs owned by the manager of the Cortijo that like to lie on the patio in the sun. There is free, unlimited Wi-Fi available in the bar and sitting room areas.

Cortijo Rosario is renovated to a high standard whilst retaining its traditional heritage. As such, the farmhouse should not be considered a luxury villa or hotel. Towels are changed once during the week and rooms are serviced every other day.

There is one single room available, which can be guaranteed with a supplement from GBP 120 payable in advance on booking. We may be able to confirm another single room closer to departure, which will be from GBP 220 for a twin room as single occupancy. Please contact our sales team to check if this is available no more than two weeks before departure. Weather permitting, on every departure the catering team at the Cortijo will demonstrate how a true paella is made with the tips you normally don’t get from recipe books! 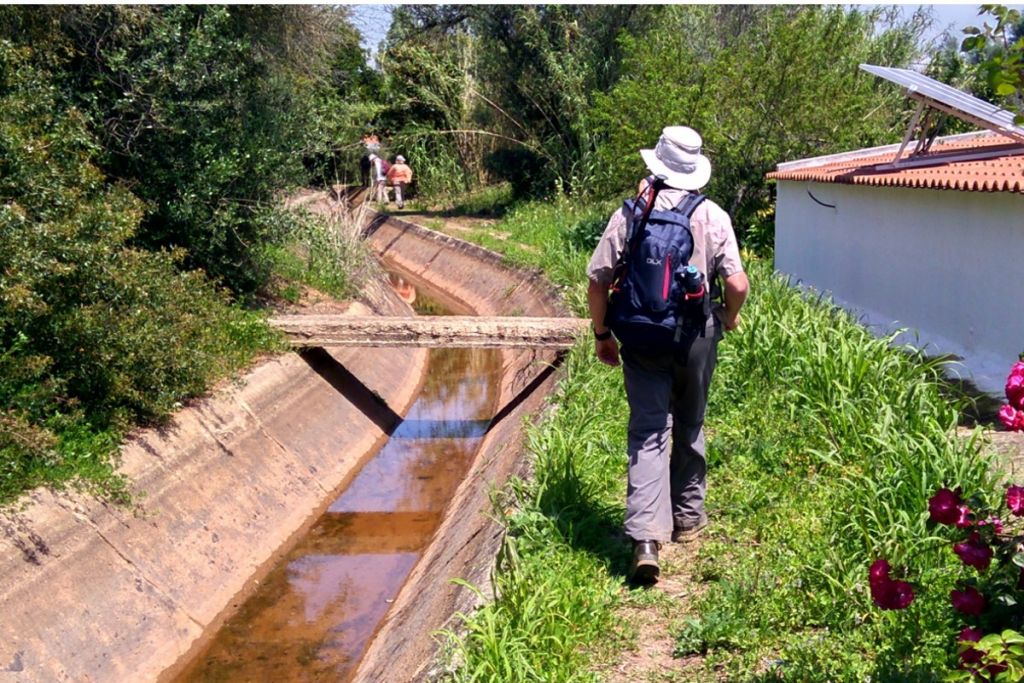 Dublin to Tuscany
7 Nights from €1205 per person
View Itinerary 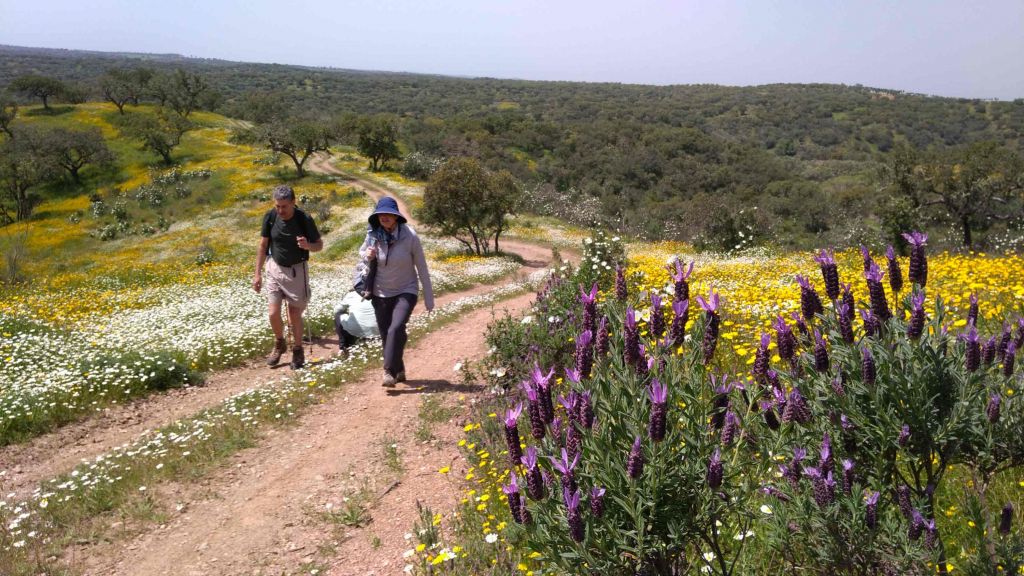 Hiking in Portugal – Walking in Paradise

Dublin to Madeira
7 Nights from €959 per person
View Itinerary